Shortlisted for the 2019 “Lighting the Fire” Awards that celebrates the young people, adults and organisations that excel at supporting young people to manage the conflict in their lives.

The Ubuntu Round Tables Project brings disenfranchised young people and their local police officers together to build respect and understanding and so reduce Police-Youth antagonism and build the trust that underpins safety on our streets.

The project has been created through a powerful partnership between Youth Futures and the Tutu Foundation UK, and is born out of one young man’s vision for change following a disrespectful and upsetting stop and search. The project creates a framework that enables local young people to invite their local Police Officers to engage with them in a discussion facilitated by other young people. The topics are chosen by the participants during a preparation process ensuring that they are locally relevant.

The project creates an environment that enables disaffected youth and police to be open to each other, with an aim of deepening understanding and respect both ways. Together they engage in exercises requiring frank speaking and respectful listening. The outcomes are tangible, for example when the police invited the young people to conduct a stop and search on themselves.The young people experienced the responsibility that goes along with power while the police put themselves in a vulnerable position.

This is, essentially, a community mediation project led by communities in different areas with the support of the Partnership. It is designed to enable the Police Officers to understand young people as real people, and to enable young people to appreciate and begin to trust the humans behind the police uniforms. The skills learnt and the experience of taking part are passed on to peers. 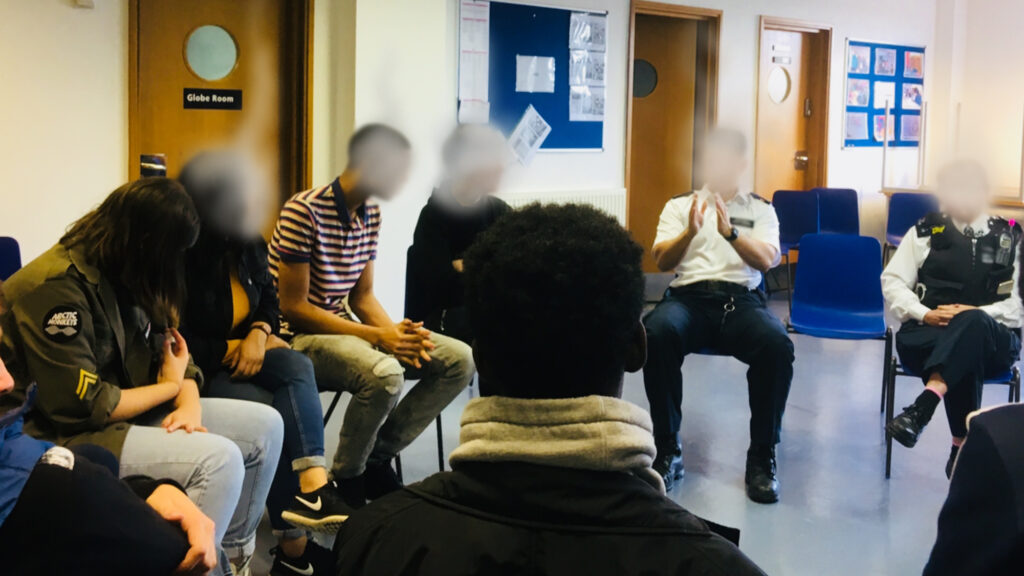 An essential element of the Ubuntu Round Tables project is that it is Youth-Led. The project management framework provided by the Tutu Foundation – Youth Futures Partnership is designed to enable and empower young people to take control and to organize. The project creates opportunities for young people who have a mistrust of police officers to gain training and then work as facilitators mediating between groups of local young people and local police officers.

Through this project the young people who are leading and facilitating it have worked with over a hundred police officers, over 200 young people and presented their work at a Parliamentary symposium alongside David Lammy MP, demonstrating the importance of community policing and the importance of nurturing relationships and common ground between police and those that are being policed.

An essential part of the long term viability of this project is to train new young facilitators from the communities we work with so that the project is always led by young people who intuitively understand and can build trust in the communities they are working with. By building capacity the Partnership helps Young People help and support their own communities. The plans in the pipeline for Phase 2 will deliver even more.

The Ubuntu Round Tables Project begins with training and discussion sessions for the Police and Young People as separate groups. These sessions establish expectations, ground rules, areas for discussion and build trust with the facilitators. These are followed by the Ubuntu Round Table sessions themselves during which the Young People and the Police engage in facilitated discussions and role play.

The structure of the project recognises and works to mitigate the power imbalance that exists between the young people and the police. It is for this reason that the facilitators are largely 25 or under, black or from an ethnic minority, and may have been in difficult interactions with the police themselves. They have developed their own respect for individuals whoever they may be.This makes them safe from both perspectives and easier for the young people to relate to and to trust.Their way of being with young people and police alike inspires the confidence of all.

The exercises are carefully crafted to reveal the underlying issues that those present wish to talk about, including violence on the streets, drugs related crime, stop and search, in a way that there will be no ‘come-back’ from an opinion voiced. Everyone is required to be respectful and to listen whether or not they agree. It is the facilitators firm presence and gentle, subtle guidance that creates the safe environment for these frank exchanges.The Project’s strengths are that it is Youth-Led and that the power relationship between the police and young people is skillfully managed by the facilitators to create the opportunity for all participants to talk openly and honestly. The project is building the capacity of the young participants to mediate in challenging situations, to help the police see the person behind the suspect, to help the young person see the human behind the police uniform, to begin to build mutual trust and respect in communities across London.

The report evaluating the Ubuntu round Tables Project in ten Boroughs across London can be found here.